Archive for category: Fan Of The Week

You are here: Home / Fan Of The Week

We caught up with Chumlee when he was in the shop the other day -here he is visiting with guests. He plans on being in the shop a lot more over the summer – check back here for details soon!

Stopping by the D Casino Hotel just downtown the street Rick Harrison was proud to show off his brand new bike he received from Kawasaki USA . This is definitely one item that’s not going in his shop! Fans crowded around to take pictures with their favorite Gold & Silver Pawn Shop owner and Rick even took some time to pose for a photo with one of the D Casino’s beautiful cocktail waitresses.  If you’re planning on spending some time in Vegas soon, be sure to make the D your hotel destination.  Nestled in the heart of Downtown Las Vegas, on the Fremont Street Experience, you’ll be in walking distance of the World Famous Gold & Silver Pawn Shop.

We just added several more new shirts to the online store.  Not only did we add some cool new graphics, but we’re now offering Kids size T-shirts.  Click shop at the top of the site now and grab one at the new price of $18.50, and pick one up for the kids too for $14.95!

The end of an era.  For the last 5 years The Gold & Silver Pawn Shop have offered the Old Man Signature Series Medallion encapsulated and authenticated by our friends at NGC.  With the close of 2015 the Old Man has decided put this project to rest and move on.  When asked why he was bringing the Signature Series to an end, the Old Man stated, “Because my damn hand hurts!”

Over the 2015 Holiday the last one ever sold in shop to a few lucky fans.  Left to right: Jason, Dave, and Betty Ann from Campbell River, BC Canada.  Thanks to everyone who has purchased one of the medallions.  We will continue to offer the non Signature Series medallion in store and online.  Stick around we’ve got some more cool projects coming.

“If you’re a celebrity and you endorse a Republican, it’s sort of like career suicide,” Harrison, the star of the “Pawn Stars” television show, said in a recent interview with The Daily Caller. “But I’m at a point in my life where I don’t care.”

The show about his family business — the Gold & Silver Pawn Shop here on Las Vegas Boulevard — is one of the History channel’s most popular and has made him a lot of money. (Before the TV show, the store saw 100 customers a day; Harrison now estimates 4,000 people walk through his door daily).

“I’ve already been told it’s cost me endorsements,” Harrison said of his political activism. “But the thing is I’m a well-off guy and I care about my kids. You know what I mean? I could quit working tomorrow and I’d be fine for the rest of my life. I want my kids, my grandkids, to have a great life.”

for president. He has already made several trips across the country for the Florida senator and says he will help as much as the campaign wants him too.“I just agree with so much he has to say,” Harrison said while seated at a conference table in the back of his pawn shop. “He’s a powerful speaker. He knows foreign policy. He wants to bring trade schools back, which I think is a huge deal.”

Harrison said he first met Rubio earlier this year at a small political event in Las Vegas. The two later had breakfast in Los Angeles. He liked what he saw. “It’s a guy I believe genuinely cares,” he said. “I mean, I can read people.”

But what about the argument that Rubio is the Republican version of President Obama — an inspiring speaker but no executive experience?

“I know guys who ran pawn shops for 50 years,” Harrison said. “I wouldn’t pay them 50 cents an hour to work here. Experience isn’t everything.”

What about Donald Trump, the presidential candidate with a Vegas hotel named after him?

“Let’s put it like this,” Harrison said. “Him growing up, he never once heard the words, ‘no son we can’t afford that.’ It doesn’t make him a bad person or anything. I just think he can’t understand the American people like other people can.”

On education, Harrison says: “This whole idea of Common Core is the most ridiculous thing on the planet. The thing is we can’t have a cookie cutter system where you train every kid to go to college — even kids you know aren’t going to college.”

On regulations, Harrison says: “There’s a reason why when Reagan became president, he started getting rid of regulations and we had a booming economy.”

On being a small business owner: “The problem we have in this country — it’s a nightmare to do business anymore…Make it easy to do business, it will bring people out of poverty, plain and simple.”

On Obamacare, Harrison says: “My healthcare doubles and it’s for my employees and it’s not nearly as good as it used to be.”

On the Democratic field for president: “You have Hillary, who, quite frankly, I can’t believe has not been indicted yet over the email thing….You have Bernie Sanders, who just wants to create a socialist paradise like Venezuela…It sounds great. It really does. Everything for free. But it don’t work.”

With such strong political opinions, would he ever run for office himself?

“Because if I got up there with those people,” he said of politicians, “I would call them all fucktards.”

But hasn’t Trump proven that you can run for office and say what you really think?

“I mean there’s no way I could put up with that,” he said. “It would drive me insane.”

Still, Harrison says he has been encouraged to run for something. “I’ve been asked by multiple senators to run for Reid’s spot,” Harrison said of the seat being vacated next year by retiring Democratic Majority leader Harry Reid

.What sort of relationship does he have with Reid?

“I’ve met him several times back in the day when he was more of a really conservative Democrat,” he said. “Then he just sort of fell off a cliff. I don’t know what the hell happened to him.”

“Some politicians are in so long they completely lose touch with reality,” Harrison added.

What does he think of the argument that “Pawn Stars” — portraying a family business, the free-market at work and people shooting guns — is a conservative show?

“This is normal life for people,” he said of his show. “OK? What’s normal life for the majority people of America, the liberal press thinks is like ‘oh my gosh.’ We don’t live in that little weird bizarre vacuum of San Francisco.”

On the show, Harrison speaks fluently about the history of items brought into the store. He insisted that’s not rehearsed.

“On the show, I haven’t seen it until its in front of me,” Harrison said of the items he bids on. “I think that’s why the show is so successful compared to all the other shows that try to copy me. Those are all scripted. I really am that nerd.”

“Most of it’s in my head,” he said of the stories he tells about the items, though he acknowledged: “I have to stop and fact check sometimes.”

He attributes his voracious reading appetite to his epilepsy. “I only sleep about four or five hours a night. I read all night long. I read the history of batteries twice. I really did. I have a dog-eared copy of Isaac Asimov’s “Understanding Physics” next to my bed.”

Harrison, who describes himself as a “spastic guy,” perked up while talking about his vacation home in Oregon, which he says is “completely off the grid” and the place where he goes to get away.

“I’m like seven miles from a power line,” he said. “We create all our own power, got a big garden.”

Pulling out his phone to show photos of his place, Harrison says: “That’s my turbine right there.”

He usually spends the summer there, and can get there from Vegas in “15 hours if I drive fast.”

“I would be so-on the grid if there was a power line by me,” he acknowledged with a chuckle. “Most people don’t realize what a pain in the ass it is.”

On a recent sunny morning the day of the Democratic debate in Las Vegas, the pawnshop had a steady stream of customers walking in and out of the store. Items for sale included a $2,600 autographed Jimi Hendrix poster, a $15,000 signed photo of Elvis and a $100,000 Super Bowl championship ring.

One shirt for sale says: “Vote Chumlee for president.”

If Chumlee actually ran for office one day, could he count on Harrison’s support? 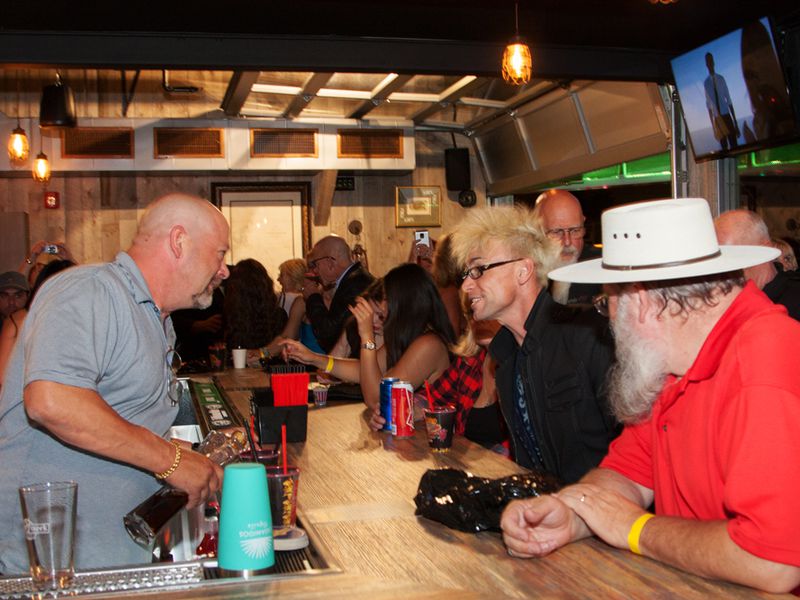 Sample 16 draft beers and ribs in your Bloody Mary at the Pawn Plaza.

Rick’s Rollin Smoke BBQ & Tavern has debuted at Pawn Plaza and fans of the Pawn Stars can now be poured a tipple by Rick Harrison himself, when he’s not distracted by the responsibilities of his  Gold & Silver Pawn Shop across the parking lot.

The upper level bar is connected by dumb waiter to the Rollin Smoke BBQ outpost below and guests order finger foods to be sent upstairs while they sip on 16 draft options. Two exclusive craft beers have been created for the bar, a Joseph James “Natural State” IPA and the Big Dogs Rollin Smoke Amber Ale, “featuring malt slow smoked with peach wood.”

Six “signature” cocktails are on the menu, priced at $10, with a Bloody Mary created with “Tito’s Vodka, Ballast Point Bloody Mary mix, fresh lime and topped with green olives” priced at $8. They offer a $4 “ribbed for you pleasure” option that will add a “delicious slow smoke rib” to your Bloody Mary glass. Naturally for the marketing savvy family, there is also “aged” tribute to Rick’s father, Richard Benjamin Harrison.

Thanks to everyone who came out on Saturday to help us support the cause!  Rick had a blast meeting fans, taking photos, and of course riding his bike!

If you are holding a winning ticket, you will be contacted shortly with instructions, or you can reach out directly to the Foundation at nvepilepsy@efa.org.  After this week you will have 60 days to claim your prize.